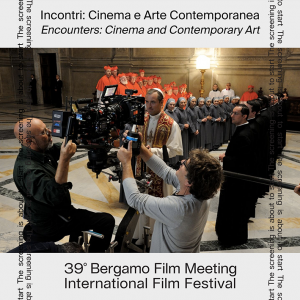 On the occasion of the 39th edition of Bergamo Film Meeting, from April 24 to May 2, the section ENCOUNTERS: CINEMA AND CONTEMPORARY ART – born from the collaboration between the Festival and The Blank Contemporary Art – is aimed at highlighting the intersections between the world of cinema and that of contemporary art and it will be converted into three digital appointments that will be broadcast on social media channels. Guests will be the cinematographer Luca Bigazzi (Milan, 1958), the actress, director, dubbing actor, LIS coach and organizer of CINEDEAF – International Festival of Deaf Cinema Deborah Donadio (Policoro, 1993), and the visual artist Gian Maria Tosatti (Rome, 1980) together with the director Lorenzo Quagliozzi (Rome, 1999).

TALK WITH LUCA BIGAZZI
Saturday 24 April, 3 pm
Luca Bigazzi in conversation with Claudia Santeroni, coordinator of The Blank, on the connections between the making of movie scenes, the organisation of contemporary art performances and the evolution of light in painting and cinema.
Cinema originated from the combination of different disciplines and inventions: the mirror, the camera obscura and photography, a plurality with which the History of Art was also confronted. By tracing their history and interpreting it from a new point of view, the conversation with Luca Bigazzi aims to highlight gbsimilarities and differences between these two areas of contemporary culture.

TALK WITH DEBORAH DONADIO
Thursday 29 April, 3 pm
Interview with Deborah Donadio conducted by Sara Tonelli, head of the educational projects at The Blank, on the relationship between cinema, deafness and accessibility, through topics such as accessible educational opportunities in the field of cinema, the meaning and value of deaf cinema, the distribution of works by deaf directors on the market, the inclusion of deaf talent in the film circuit and the promotion of the knowledge of deaf language and culture through the art of cinema.

Thanks to the interpreting service in LIS and subtitling, the appointments are also accessible to the deaf audience, which The Blank addresses through LISten Project.