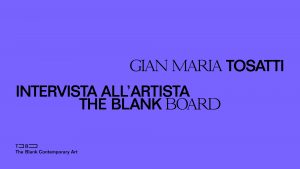 Elisa Muscatelli – How would you describe your artistic practice to a first-time spectator?

Gian Maria Tosatti  – So I create devices that generate performances, this is the most correct description of my work, which is normally defined as an environmental installation, but what environmental installation means: it is the creation of a machine inside which the viewer is placed and when he is inside it he has an experience. This experience is the work of art, also because as Marcuse said in one of his essays published in 1938 when a man is incapable of fully living his experiential capacity, art will stop being meaningful. The problem is that today we still have enormous difficulties in knowing ourselves, in experiencing life at all its levels, and art is a tool that helps us to appropriate these capacities that we should have, however, to live a full experience of our life. There are meanings that often escape us in our daily actions, confessions that we are not able to make to ourselves and that also determine the way we live our lives every day; here, art comes to the rescue and tries to provide a solution, a solution to an impasse. My machines, these large environmental installations that I build in cities around the world, are fields of friction between what we are used to being on the outside and what we are on the inside.

EM – You often exhibit in many different urban contexts. Have you encountered different approaches compared to the ordinary public, classic visitors to museums? Do the cultural specificities and traditions of the place where you work influence the presentation of the work?

GMT – There is no standard public for art, in the sense that the typical public is not necessarily a public that confronts the work of art in the way it should be approached, what I mean is that art is always for everyone, sometimes the museum visitor expects something specific from art that is linked to his or her expectations. In reality, I have often had a more pleasant relationship with people who had no previous training, with those who at first says: “Well, I don’t understand anything”, because art doesn’t have to be understood, it simply has to be confronted and made to work, that is, to activate something that concerns us from that device that is the work of art, so there is this difference between those who stand in a pure way in front of the work without trying to understand it and then is able to experience it in depth and those who are there and try sometimes even technically wrongly to understand something that is not even what should be understood. Art is not a quiz. Many times I find myself in front of an audience that pretends to be more informed and almost tries to say “Oh but this comes from this, this comes from that other” art is not a quiz because it would be like looking at a person and then saying “Oh this comes from his mother, this comes from his father” and at that point, you have completely lost the identity of that person, you have turned him into a Frankenstein of pieces, it is not like that in the truth, when you do this you lose the identity of that person, and it is the same with art.
In the end, there is no audience that is different from the general public, in the sense that it is the way in which you approach the work of art that changes things, so I always try to work by deducing the knowledge that I am looking for through the work because I am a researcher and for me, the work is a mechanism of knowledge. This is how it goes: the artist knows something and then leaves the artwork open as if it were a trap for other people to fall into, the artist builds the trap to fall into and then leaves it open so that it is not only the artist who falls into it. I go around the world creating works of art because every city, every community has a certain amount of knowledge about certain important topics. Fortunately, we do not live in a country at war, for example, while I was recently in Ukraine where there is a war that has been going on for many years. Fortunately, some elements of “Being” in Italy cannot be understood today and it is necessary to move, to go to other places, to understand what it means to live in a condition where death can arrive for political reasons. So it is obvious that when I try to find the secret of a community and then exhibit it, the relationship with that specific public, which I repeat is not always the whole public, because many people travel specifically to see these works or perhaps come from other countries or see them through documentation, but the public of that country often feels profoundly revealed, revealed to itself, not revealed to the eyes of the world, they do not think about that, but they feel revealed to themselves. I have often realized how powerful this can be because there have often been scenes of deep emotion, of crying, even of suffering at a certain point, spectators who have been physically disturbed during the opera, but not because there were any particular fatigues, but because confronting some images that belonged to them so intimately had activated a sort of mechanism that we know from the scene in Hamlet’s opera when the king becomes blind, or in any case can no longer see because he is faced with the truth of what he has done. In that case, it is an accusatory act, in my case I never try to put myself in front of the public in an aggressive way, but certainly showing them something that concerns them so deeply means that the reactions are not the usual ones you might expect in a museum experience such as “Oh beautiful” and usually this never happens, there are many very different things that happen in my works, especially when people leave. Sometimes I’m lucky enough to be able to meet or be recognized by people who come to see the work and outside maybe they approach you and tell you what they think, other times you stand to one side, especially in distant countries, you stand to one side and observe the way people come out and you realize that they have completely changed their way of being compared to when they came in and this means that the work has worked.

EM – Indro Montanelli, Edward Colston, Cristoforo Colombo, vandalized monuments and the desire to rewrite a part of history. How does the urban art installation fit into this debate?

GMT – There is no documentary in this project, in the sense that an artist’s portrait is never a documentary, an artist’s portrait is always something magical from a certain point of view, magical because it is able to show what is not visible. A few days ago I was talking about The Portrait of Dorian Gray and I was saying that this short novel by Oscar Wilde is an interesting element to reflect on, because on the one hand, the portrait that the painter makes of the protagonist is the only thing that he is able to look at, beyond the external aspect, but above all, there is another important aspect: that portrait in fact kills the evil in the protagonist and in doing so kills the protagonist himself because perhaps that character Dorian Gray is a person who could not be saved. But looking inside ourselves and finding it almost impossible to bear the evil, the evil inside us, means that in a certain way we necessarily begin to correct it, we necessarily begin to change it, to fight it, and by fighting it we are perhaps fighting against ourselves, but all this is right. It is never exactly a documenting as much as it is revealing, and the works are revealing, so ‘My heart is as empty as a mirror’ is a great confession in front of oneself, and a confession is not really a document, it is a revolutionary act because it is the first step to being able to change.

EM – Which historical, literary, or cinematographic reference has had a major impact on the development of your artistic and personal career?

GMT – It is very difficult to answer this question because an artist lives with constant references, they are always in front of his eyes, sometimes they are conscious, sometimes unconscious, sometimes someone says to you, but you did not realize it, that there is so much of this or that in this work. It’s like asking an astrophysicist which star in the galaxy fascinates him the most, it’s impossible, in the sense that the stars are all perfect, all beautiful, so I could name a hundred and fifty thousand and they would all be important. From the one with a more structural role, which was perhaps to create the very image and idea of how a work of art should be done, or even just how one should behave on this earth, to the one that had the smallest contribution from the point of view of the volume, but sometimes it is the detail, it puts detail in your formation that is decisive because it is in the details that the really decisive things are. So I won’t answer, I can’t answer this question, it would be too long, the only thing I can say is that yes, you have to live, but this is true for artists as well as for those who just love art, you have to live constantly in this kind of great trans-temporal process, like the protagonist of Auto da fé by Canetti, who puts a team of friends around us, of people who know us very well and who are the great authors, great characters in literature. We must always be in dialogue with them because they are the guardians of the secrets that we sometimes don’t know, that we sometimes forget. The fortune of art is to be able to put us next to men who were born and lived hundreds of years ago, and who are still present with us, through their works and through their voices. Honestly, I don’t find any difference between the voice of someone who speaks to me in the contemporary world, telling me what he thinks about politics, and the voice of Platone who speaks to me about the Republic, there is no difference in the sense that they are two voices, the words come to me clearly in both cases, it is I who make the difference, whether I intend to follow that thought or not, so I don’t think it is important to say what the references are, but the really important thing is to continue to have a constant relationship with one’s own references.