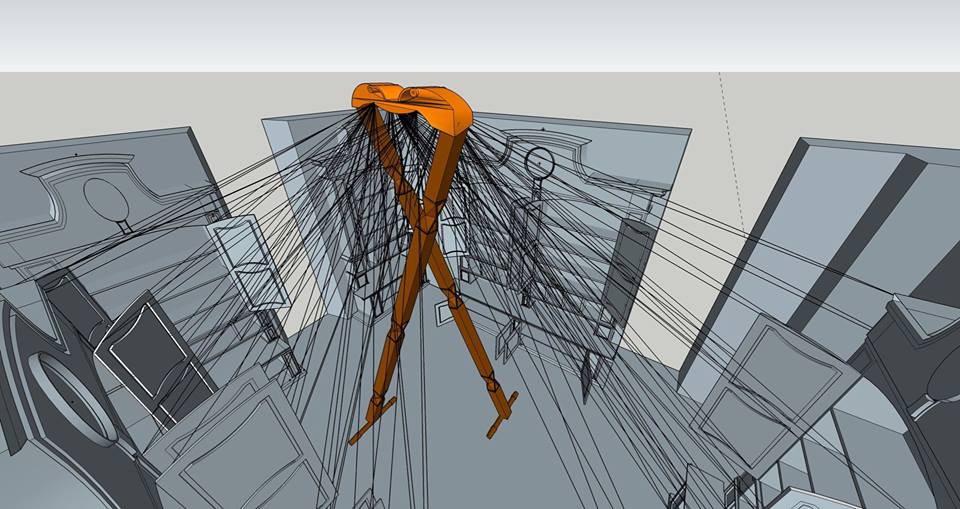 SANTIAGO REYES VILLAVECES (Bogotà, 1986) IS THE WINNER OF THE 41ST EDITION OF PREMIO MATTEO OLIVERO

Santiago Reyes Villaveces (Bogotá, Colombia 1986) is the winner of the 41st edition of Premio Matteo Olivero, organized by the City of Saluzzo and Fondazione Amleto Bertoni with the aim of promoting the territory through art. Premio Matteo Olivero is placed within START / history and art in Saluzzo, the festival dedicated to all forms of art that takes place in the capital of the Marquisate from April 26th to May 26th.

The artistic direction has been entrusted to Soluzioni Turistiche Integrate, which relies on the collaboration of Stefano Raimondi for the curatorship of the Prize; Raimondi, formerly curator at GAMeC – Galleria di Arte Moderna e Contemporanea in Bergamo, is director of The Blank Contemporary Art, the main Italian network for promotion and valorisation of contemporary art.
Origin, intended as something at the beginning of something else, the fundamental cause, the matrix, the inspiring element of an event, is the theme chosen for the 41st edition of the Prize, which communicates with the theme chosen for START, i.e. Character, of which the Prize interprets the origin.

The international jury composed by Chrissie Iles, Curator at the Whitney Museum of American Art in New York, Nicola Ricciardi, Artistic Director at OGR, Turin, Arturo Demaria, Counselor at Fondazione Amleto Bertoni, Roberto Giordana, deputy manager at Cassa di Risparmio di Cuneo and Stefano Raimondi, curator of the Prize, has unanimously decided to reward Harp project by Santiago Reyes Villaveces, created by the artist in collaboration with the composer Nicolás Jaramillo and the musicologist Daniel Villegas Velez: “for having been able to interpret in an innovative and poetic manner the Sacristy of Ex-Sant’Ignazio Church, presenting a work that has its roots in the Jesuits’ history and capable of dealing with a complex issue, such as colonialism, in a lyrical and original way. At the same time Harp interacts with Saluzzo’s traditions, such as music and craftsmanship, and presents itself in its monumentality as a body capable of interacting with the viewer “.

Forty-one artists of sixteen different nationalities took part in the Prize, invited by prestigious international advisors: Americans, Azeris, Brazilians, Britons, Colombians, Koreans, Cypriots, Filipinos, French, Iranians, Israelis, Italians, Netherlanders, Polish, Russians and Swiss challenged themselves by presenting original and innovative projects to value a suggestive location rich in history, such as the Sacristy of Ex-Sant’Ignazio Church, which has now become a room in the Town Hall of Saluzzo.

The idea takes shape in the form of a solo exhibition at the Sacristy of the Ex-Sant’Ignazio Church, open from April 26th, the opening day of START festival. The current shape of the hall – part of the architectural complex including the College, now Palazzo Comunale – dates to 1725, but since 1831 has served as an archive, without changing its structure. Inside, it is still possible to admire two frescos representing Sant’Ignazio on both doors and the coat of arms of the Jesuits, who inaugurated the Sacristy at the beginning of the 18th century. Harp project consists in building an expanded copy of the Tópaga harp (1680), that is meant to occupy the architectural space of the Sacristy. The instrument’s design is deformed using an elliptical structure with two focal points. Using the Sacristy’s open drawers, windows, and physical structure as resonance boxes, Harp creates a polyarchic harp, a historical and architectural flow, aiming to destabilize the original history. In 1725, the Order of the Jesuits inaugurated the Sacristy of Sant’Ignazio Church in Saluzzo. The same year, the Jesuit Father José Gumilla was directing one of the most ambitious territorial expansions in the conquest of the Americas in the Orinoquía region of the New Kingdom of Granada—a contiguous region shared today by Colombia and Venezuela. The practice of polyphonic European music was one of the main tools used to convey the system of European values during this period of Jesuit expansion and evangelization in the Americas. Among the instruments used to organize processes of territorial, cultural, and sensory colonization, the harp stood out for its portability and structural simplicity.
Using the harp as a symbol of its ancient Greek and Roman origins, Italian Humanism strategically deployed art’s mimetic capacity to (re)form communities in the “New World.” For the Jesuits, the Renaissance harp worked as a synecdoche capable to make the classical universe of European cosmology present and audible.
Harp uses the numerous drawers and lockers of Sacristy’s furniture, opening them and making the archive’s structure open, visible and resounding. The instrument will use a set of diverse resonance boxes: the building itself, the drawers and the windows. Created in collaboration with the composer Nicolás Jaramillo, a musical piece will be performed during the exhibition’s opening by a local choir, from the province of Saluzzo. Singing with their heads inside the open drawers, the performers will not directly play the harp, but will use the vibration of their voices to make the strings resonate through the space. The entire structure of Harp parasites the space it inhabits to sustain itself amidst a network of physical and discursive tensions to build a temporal and embodied experience connecting two dissonant spaces and historical experiences. This project renews and gives new meaning to the harp through an erratic process of sensorial counter-conquest.

One of the main innovations of the 41st edition of the Prize is a change in the mode of participation. Artists have been selected and invited to take part in the Prize by twenty-four major international advisors, curators and directors from international institutions including: Solomon R. Guggenheim Museum in New York, MAMbo in Bologna, Whitechapel Gallery in London, Castello di Rivoli, Mambo of Bogotà, Heart in Herning, Mart in Trento and Rovereto.