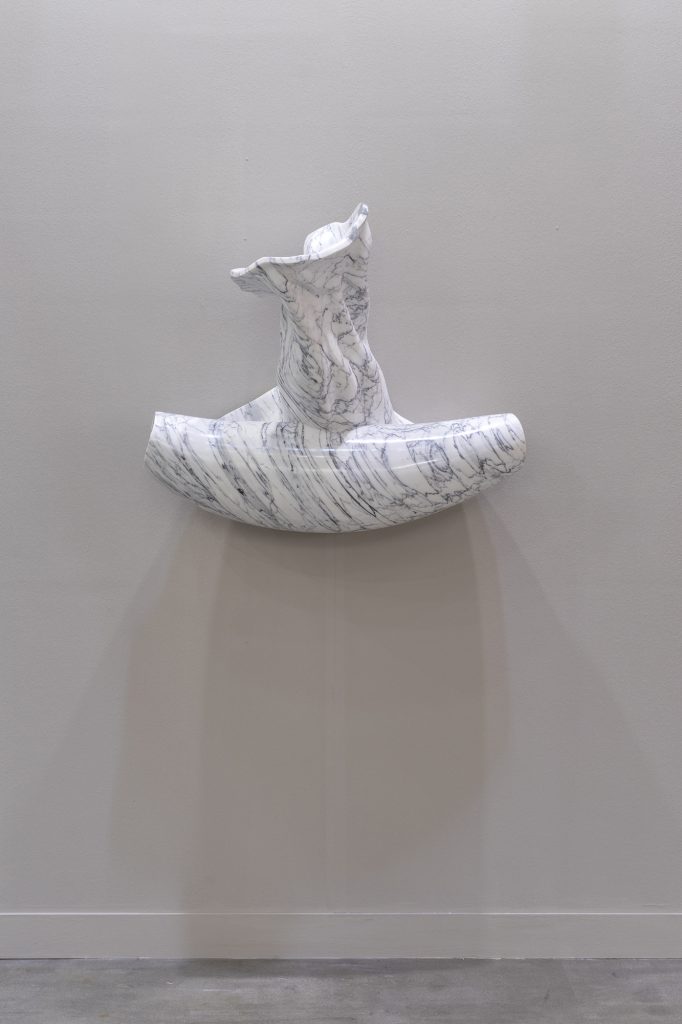 Thomas Brambilla Gallery is pleased to present “Copper, Marble, Cotton”, a curated group show with works by three American fellow-artists; Lynda Benglis, David Novros and Joe Zucker. The exhibition examines the choice, by each of the above-mentioned artists, of specific traditional materials for both their cultural associations and formal properties, enlightening also the significance role of traditional and concrete materials in the currently contemporary art.

Starting from the Sixties, the importance of materials has been re-evaluated by the critics, leading also to an expansion of the concept of Art itself. For the first time, material gained ascendancy over form. Only during the Seventies, the attention has been directed increasingly towards text written and pictorial documents as means of expression, while in the Eighties, artists went back to the balance of material and form. From the Nineties, however, the possibilities of digital technology led to a reduction in the importance of traditional and concrete materials. Nowadays the trend seems to have changed and the critics praise the generation of artists, such as Benglis, Novros and Zucker –and many more-, to whom the aspect of materiality has always been a key concept in their poetics, although each of them has dealt with it and integrated in their practices differently.

Benglis, Novros and Zucker tried to overcome the Minimalism’s break with unconventional formats of paintings and sculptures, investigating new limits and re-elaborating the classical tradition in the making of art. They believed that the chosen material should govern the character of the artwork and they thought in a more expanded sense of “technique”, which could encompassed the processes’ of the artist himself. The artists invited to participate at “Copper, Marble, Cotton” focus on the characteristics and the evocative power of such diverse materials as marble, copper and cotton.

Departing from the non-traditional art material which dominate contemporary art, the brand new series of marble sculptures by Lynda Benglis is a continuation of her ongoing embrace of the natural qualities of her various media. The sculptures’ surfaces recall the fitful undulations and the theatricality of the ancient Greek statues’ draperies but also her ongoing projects on Baroque fountains. This effect is amplified by Benglis’ specific choice and use of different colored marbles.

David Novros began his series of Coppers when he lived in the desert of New Mexico in the Eighties. Novros focused his artistic research on Medieval and Native American art, searching for peculiar primordial shapes and natures and absorbing the fascination for how the materials and colors could affect his practice. To create the Coppers’ works, Novros used line charge explosive; firstly, he taped it down to the surface, following the roughly drawing, and then detonated it. The result is a controlled explosion of shapes and swellings, to whom he after soldered some old gold-mining pans and finally painted in gold and enamel paint.

Joe Zucker, one of America’s most innovative artists, has always experimented with what has become his signature technique: gluing cotton balls to canvas in a gridded arrangement and painting over them. Resulting in a highly textured surface reminiscent of antique Mosaics in Ravenna, this technique radically transforms the surface of the canvas and challenges the “flatness”. His imagery is often related, in some way, to the materials and processes, for example the series’ with cotton plantation imagery executed in cotton balls rolled in paint.

Lynda Benglis (1941, Lake Charles) is an American artist best known for her use of poured sculptural forms made from wax, latex, metal, and foam. In addition to sculpture, Benglis works in video and photography, and has used media interventions (such as a well-known ad placed in Artforum in 1974, showing the artist nude with a dildo between her legs) to explore notions of power and gender relations.
Benglis’ work is in extensive public collections including: Guggenheim Museum; Los Angeles County Museum of Art; Museum of Modern Art, New York; The National Gallery of Victoria, Melbourne, Australia; San Francisco Museum of Modern Art; Walker Art Center, Minneapolis and the Whitney Museum of American Art, New York. Lynda Benglis lives and works in New York, Santa Fe and Ahmedabad, India.

Joe Zucker (b. 1941, Chicago), throughout his extensive career, has exhibited alongside artists such as Agnes Martin and Brice Marden at the pioneering Bykert Gallery in the 1960s, and later with dealer Holly Solomon, who was well known for her support of new and experimental mediums, including the New Image and Pattern and Decoration movements to which Zucker belonged.
Zucker’s works is included in extensive public collections: The Museum of Modern Art in New York, The National Gallery of Victoria in Melbourne, The New Museum in New York, The New York Philadelphia Museum of Art in Philadelphia, The Tel Aviv Museum in Israel, The Whitney Museum of American Art in New York, The Brooklyn Museum in Brooklyn, The Metropolitan Museum of Art in New York and many others.

This website uses cookies to improve your experience while you navigate through the website. Out of these cookies, the cookies that are categorized as necessary are stored on your browser as they are essential for the working of basic functionalities of the website. We also use third-party cookies that help us analyze and understand how you use this website. These cookies will be stored in your browser only with your consent. You also have the option to opt-out of these cookies. But opting out of some of these cookies may have an effect on your browsing experience.
Necessary Always Enabled
Necessary cookies are absolutely essential for the website to function properly. This category only includes cookies that ensures basic functionalities and security features of the website. These cookies do not store any personal information.
Non-necessary
Any cookies that may not be particularly necessary for the website to function and is used specifically to collect user personal data via analytics, ads, other embedded contents are termed as non-necessary cookies. It is mandatory to procure user consent prior to running these cookies on your website.
SAVE & ACCEPT
[Prodotti category handmade] [E cd pop vinili category] [Accessori infanzia category e pappa prima seggioloni sedili e seggioloni e cuscini fodere allattamento per] [Center running il club trasferta a con ferrara torino] [Le podista mentali armi del] [Di torino natalizie il delle club ecco il per programma festivita center running allenamento] [3 meravigliosa nella vercelli ascoli pro 1 brutto batte bwin 5d una un] [Inizio questo in giro ditalia gianluca sorprende brambilla di] [Sport e salute informazione efost allottavo convegno] [Contact] [gaetanomusto.com] [Home] [paolofaccini.com] [About] [Contact] [Edizione ottava l di bella recordando] [Del marzo la politica certezze dopo poche italiana 4 le elezioni per] [Anni agroalimentarenews compie 8] [Ditalia tanti giro primo sagan nel peter trasferimenti di] [Challenger biella il per successo grande di thindown] [Vuelta prende andorra si la ad aru] [11 1 09 via bianchetti 2015 fondazione la 20 adriano franco 2015 migliore bernareggi] [Partner it] [Tour e strade darte guided storia] [Fa nazionali eventi per giusta ottima la cosa tredicesima notizie edizione] [Alla notizie con perinetti angela recensioni actis incontro ciccia] [Eventi internazionali sorprese expo qualche all delusione e tante notizie]