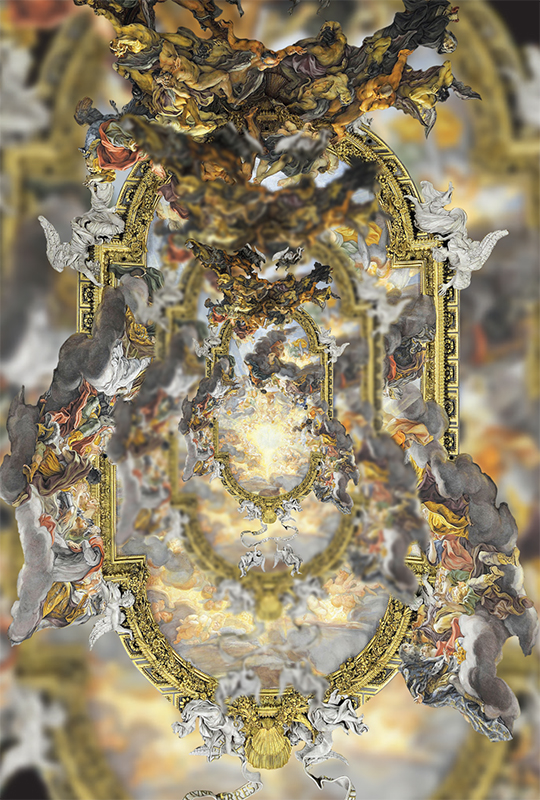 Thomas Brambilla Gallery is proud to present the first solo show of Edoardo Piermattei, Patroni (Patrons), premiering on Saturday October 7th, 2017, at 6.30 PM.
For his first solo show, the Artist, native of the Marches, will display his love for an Art proud and brave enough to define itself as responsible and essential. An attitude which could easily be considered pretentious in such an historical period deprived of norms and certainties; nonetheless, coming from a small medieval village in the Marches, Offagna, native town of the Artist, should not be considered a mere biographical information, but a cultural instance creating his artistic poetics, engaging with shapes that seek for a persistence in time.

The exhibition title is explicit and declarative, however maintaining a dignified ambiguity: Patroni (Patrons). Etymologically derived from Pater (“Father”), at the dawn of ancient Rome the term was referred to an influential and protective figure such as a legislator or an advocate, while later its meaning was transformed by the Catholicism to indicate the figure of Saints, guardians of cities or occupations. The Artist knows that Patrons ought to be an example, a model to which the community can look up to, an illustration of strength which does not belong to the volatility of the social chit-chats, but to the majestic presence of architectural elements instead. Several months ago, the public of Basel Hong-Kong queued to enter the “Porziuncola” by Piermattei, a small house inspired to the little church situated inside the massive Basilica of Santa Maria degli Angeli in Assisi, replicating the same situation of scale variation: a large building hosting the prestigious art fair, and a small Porziuncola in which to find a place to meditate. In the global megalopolis and in the prestigious art fair the Artist displays a small building inspired by a little church renovated in medieval times by St. Francis of Assisi, Patron Saint of Italy, a concrete and solid gesture building a bridge over centuries, or better over millennia, a cultural connection which according to Piermattei represents the very mission of Art.

In his first solo show as well, the Artist continues his practice of building a space inside a space: inside the wide white room of the Gallery, structured like a classic White-cube, Piermattei builds a medieval ciborium on columns made of iron pipes, designed in an essential manner and free of external decorations. The interior of the ciborium is instead painted with the style proper of the Artist, similar to a polychrome white-washing. In Catholic churches, the ciborium is a wooden canopy, held by four columns, situated above the altar on which the Service is officiated. In a different manner, in the art gallery the Artist substitutes both the altar and the Service with the Public, who walks below the structure and looks up in order to admire the interior from the walls of the dome. The gesture of lifting one’s eyes is very important to Piermattei, representing the typical movement of who is used to admire the architectures and the paintings in churches; looking up to the sky is the position of both the Artist and the audience, according to Piermattei. The same position of admiration is auspicated in another work of art displayed in the first exhibition, the Grande Pala d’Altare (Great Altarpiece), the colourful cement and plaster “brush strokes” of which are inspired by a fresco made by Baciccio, “Trionfo nel Nome di Gesù” (Tryumph in the Name of Jesus), situated in the homonymous church in Rome. The works by Piermattei always dialogue with Classic Art, however the figuration is excluded, cancelled and whited out by a thick tangle of brush strokes, forming polychrome curls of colourful cement. An iconoclastic practice not born from a theological position, but from the unstoppable action of time, which erases and corrodes everything. The result of the white-washing of time is the perpetuity of the building, of the structure which holds every possible personal characterisation, just as symbols hold every story.

In the exhibition ten other small architectural models will be installed, a compendium of temples and tabernacles, which, obeying to their function of examples and models, will transform themselves into, sculptures, guiding our gaze downwards and towards them. Once more, driving the visitor’s gaze towards the work of art is fundamental, building a relationship between them, which is never equal: it is always the work of art to draw the gaze of the audience towards itself, taking the responsibility of being necessary to both Art and Life.

Edoardo Piermattei (b. 1992) lives and works in Turin, Italy. The Italian young artist received his Bachelor of Fine Arts at the Accademia Albertina di Belle Arti of Turin in 2016. He has already participates at several group shows, among all: Codice Italia academy, Palazzo Grimani, (Venice) in 2015 and HxBxP, le accademie si mostrano, mostra delle accademie italiane, (L’Aquila) in 2016.
Piermattei’s solo exhibitions include “Porziuncola” at Art Basel Hong Kong in 2017, a solo show at Spazio Buonasera, Turin in 2016, and a solo show at Vilhena Palace, Malta in 2015.